August 23 saw the official announcement of the latest Samsung phone – the Galaxy Note 8. But are the phone’s features just PR hype or something real?

I was able to spend some time with the device at the local South African event, and here’s what I found…

The handset is definitely something to write home about, even judging by the hour or so I spent trying out the device.

I tested a few of the features and spoke to some representatives to see just how the device measures up in real life.

Here are some of the features that really have me excited for the phone’s launch in September:

Almost all major phonemakers have jumped on the dual camera bandwagon, but only a few have actually gotten it right.

When it was confirmed that the Note 8 was coming with a dual rear camera, I wondered if it would be a real innovation or just a gimmick.

What makes the Note 8 dual camera different from others in the market is that both lenses have optical image stabilization (OIS), making it the only smartphone with this feature.

The first lens is an F1.7 wide-angle lens with Dual Pixel technology and the other is an F2.4 telephoto lens – meaning that the aperture on the camera lenses is pretty great. Only the newly announced LG V30 has a lower aperture on a camera — with their F1.6 lens.

When capturing an image, both the wide-angle and telephoto lens take a photo – meaning the two lenses work together.

Where this really has an impact is in the Live Focus mode. Previously, Samsung devices have allowed you to use Selective Focus — using post-processing to give an image more depth. However I can definitely say that on my Galaxy S6 the result is often disappointing. It just looks like someone clumsily airbrushed the background.

But with Live Focus on the Note 8, it’s a whole different story. Because of the two lenses, the phone is able to replicate depth much more accurately. It captures the ‘normal’ photo, along with the Live Focus picture.

What this then allows you to do is adjust the focus after you have captured the image. And boy, are the results awesome.

Below is an example of an image I captured with the Note 8 in Live Focus mode (left) versus how it looked after I moved the slider to increase the blur effect, without needing to capture another image.

In some ways, this could be a game-changer for smartphone photography. Despite advancements in photo editing programs to make our smartphone photos presentable on Instagram, having a better base to start off of will really improve the quality of these photos.

2. The S Pen Is A Whole Lot Smarter

While I haven’t really experienced Samsung’s Note range of phablets before, I’ve found that other examples of devices with styluses never move past that gimmick stage.

Sure you can circle something on a page or draw a little picture, but in everyday usage, styluses aren’t always that convenient. You end up ignoring the stylus in favour of regular touch input.

However this doesn’t seem to be the case with the S Pen. Sure it has improvements like better pressure sensors and it’s waterproof, but the standout aspect of the gadget is just how smart it is.

The Live Message feature, which allows you to create a GIF of a written message, is cute. But what is really impressive is the translation feature.

Users will be able to highlight text on a site or message that’s in a foreign language, and the device will translate the sentence for you. It also provides currency and measurement conversions.

Another awesome feature is the ability to create notes on your Always On screen. People who are as forgetful as me will know that setting a reminder is often not enough. Soon you will clear your notifications screen and the reminder is relegated to a task in your calendar.

But with the Note 8, you can write a note even when your phone is asleep, and then pin said note to your Always On display. This means that the note is there every time you look at your phone.

This is great for shopping lists, but also reminders and to-do lists.

Some people raised eyebrows when the S8 was announced with the unprecedented 18.5:9 screen aspect ratio.

The Infinity Edge display is meant to give this feeling of an all-encompassing experience without borders. But considering that no content is really filmed in this ratio, many videos ended up being cropped or having the dreaded black frame borders to keep the content from being distorted.

But with the Note 8, Samsung is fully embracing their unusual aspect ratio. Users will be able to play their content using the entire screen.

On the S8, you can technically play videos using this ratio – but this results in cropping and zooming in on content.

Another awesome feature is the ability to capture photos using this aspect ratio. However, this feature is also on the S8. During my interview with Justin Hume, Chief Marketing Officer of Samsung Electronics South Africa, he emphasised the fact that the aspect ratio for cinematic content is normally 21:9. He says that the 18.5:9 aspect ratio therefore gives viewers the closest to a cinematic crop that they can get on a phone.

They did basically make the entire front of the phone a screen, so they might as well use that prime real estate in its entirety.

4. It Will Likely Be More Durable

A sticking point for many critics of the Galaxy S8 and S8+ is the fragility of the handsets. If you drop your device, you will likely crack it. This even holds true for people who use the standard plastic cover that came with the pre-order.

Judging by the comments on my MakeUseOf article on what to do if you break your S8’s screen, a lot of people are angry about and/or deterred by the fragile exterior.

You don’t want to spend a truckload of cash on a phone, only for it to break a week later. It also doesn’t help that Samsung’s latest smartphones don’t qualify for ADH cover, which gave you one free repair for a cracked screen. Rather, you have to pay for a warranty that covers accidental damage, and then still pay an excess when you have your phone repaired.

So naturally, one of my first questions about the Note 8 was whether it would be more durable.

According to Hume, the design differences between the Note 8 and the Galaxy S8 will likely mean that Samsung’s latest device is less fragile. The phone’s corners are less sharp, while the display’s edge has a shallower curve. This means that the phone’s structural strength has slightly increased.

Of course, we will have to see consumer reports about the device once it’s on the market to really tell how much stronger it is.

Hume added that Samsung will now be promoting covers as a core requirement for their handsets if you would like to prevent damage. 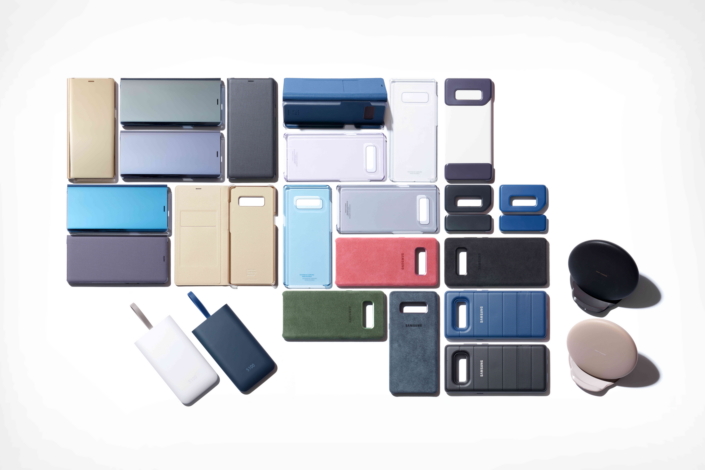 5. It’s Design Is Not Only Manageable, It’s Appealing

I’ve never been a fan of excessively large phones. In fact, through the years as a phone owner, I’ve managed to own some of the smallest devices on the market.

It’s one of the reasons I’ve never really followed phones in the phablet market. The first phablet to really catch my attention was the Note 7 — and we all know how that turned out.

The Note 8 has a slightly bigger display than the S8+, at 6.4 inches. Because of the need to integrate the S Pen into the phone’s design, it also appears larger due to the broader corners and wider structure. 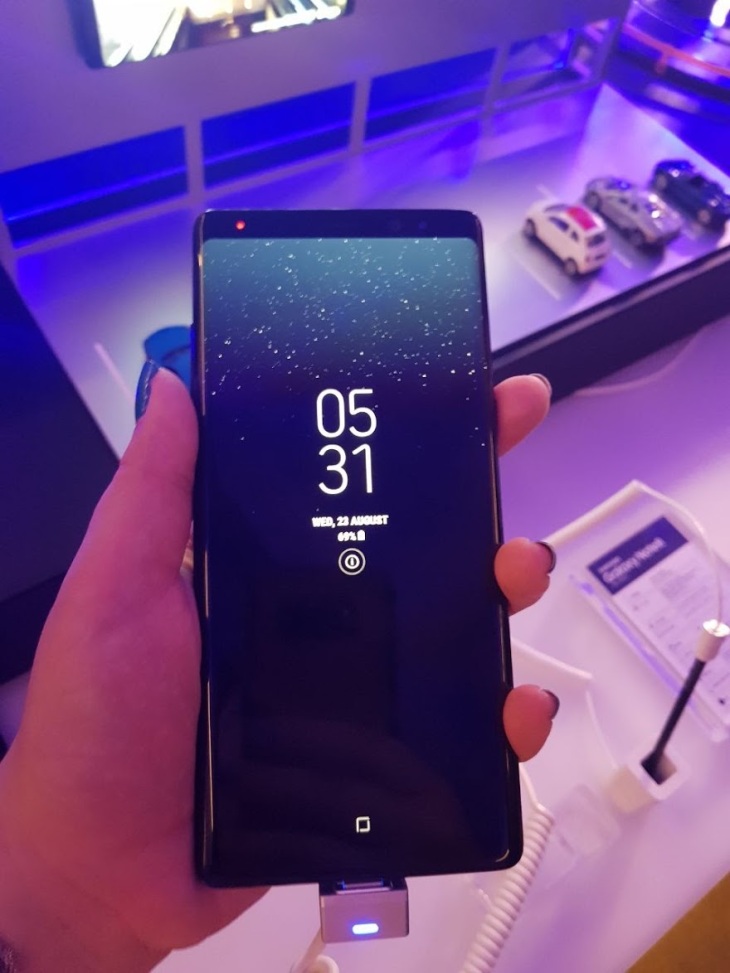 But when I actually handled the phone, I was pleasantly surprised that it didn’t feel hefty at all. It’s very light for a phablet, and it’s design makes it appear sleeker.

I didn’t get that familiar feeling of “Wow, this is a brick”. Rather, it felt manageable.

Due to the unique aspect ratio, it also means that the phone doesn’t feel too broad. It fits into your hand comfortably, while giving you enough screen space to use the S Pen effectively.

When I left the showroom floor, I left with a deep desire to own the phone myself — which is probably one of the best compliments I can personally give it.

So now that we’ve dealt with what makes the phone amazing, what is its biggest drawback?

It’s not easy to find many off-putting aspects of the Note 8 — so far it seems to be an exceptional device.

Sure, it gets finger smudges on the screen and back easily, it takes a while to get used to using the S Pen and its fingerprint scanner is still on the back of the device (although with a slightly different position).

But these are mostly nit-picky complaints. Rather, the major deterrent of the phone for ordinary consumers will be its price.

It is Samsung’s most expensive smartphone, and one of the most expensive on the mainstream market. In the US, it will retail for around $929, while in South Africa, it’s a whopping R18 499.

The price isn’t unwarranted – the phone is one of, if not the most powerful device in the mainstream smartphone market. Apple’s 2018 release will likely cost even more.

But it is a high price nevertheless, which will lock many consumers out of being able to afford the phone. This is especially true for a market like South Africa, where the phone is essentially $1 400 thanks to import costs, but also the weak economy and rand.

Contracts for the phone are expected to start from around R800 a month, which is more manageable for some consumers. However, for many of us, R800 is still a significant chunk of our monthly income.

In my opinion, the phone is worth it if you have the money. If I could afford it, I would get it in a heartbeat.

But unfortunately for many, the price will be too steep.

Are you looking forward to the release of the Samsung Galaxy Note 8? Or are you not sold on the hype around the phone? Let me know in the comments below!